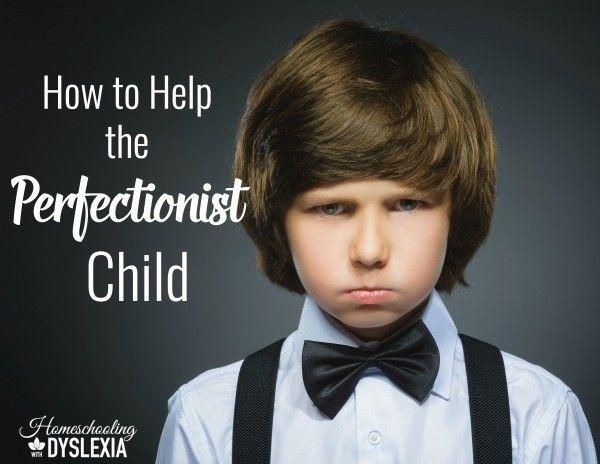 Do you have a perfectionist child?  One that is unsatisfied with pretty much anything they accomplish? Sometimes even when they’ve done a good job?  It’s sad to watch our kids missing out on the joy of creating art or music, playing sports or other competitive activities that could bring them such a sense of accomplishment.

Many kids with learning issues seem to struggle with this as well.  Something about the fear of failure, mixed with anxiety and self-doubt leads our kids to continually be disappointed in themselves and their abilities.

From a teen son who drops out of soccer just when he makes it to All-Stars to an 8-year old who has to be taken out of art class each week because of tantrums and tears, perfectionism manifests in lots of different ways.

It isn’t so much the drive or desire to be perfect that defines a perfectionist child, rather their response to not actually being perfect.  Some signs of perfectionism in children are:

Of course, not all kids will have all of these signs. Every perfectionist is unique!

How to Help Your Perfectionist Child

As in many parenting hurdles, there is a balance between pushing your kids and letting your kids sit an activity out.

Here’s how we have helped our perfectionist kids:

Praise effort rather than outcome.  Research by Carol Dweck from Stanford University has shown what is called the Power of a Growth Mindset.  Essentially, her study revealed that kids who were praised for the outcomes of their effort developed perfectionist tendencies while kids who were praised for their efforts (regardless of outcome) became more motivated to try.  Read more about how to teach your kids about a growth mindset here.

Play games.  There are so many life skills learned through the simple playing of games.  Learning how to lose (graciously) is one of them.

Help kids set realistic goals or expectations.  Encourage your perfectionist child to make an earnest attempt.  We used a touch of consequence for our perfectionist son.  He was to attempt each art lesson with a good attitude.  He could modify his project with the teacher’s approval after making an earnest effort first.  Shouting, crying or stomping out of the room resulted in a loss of privileges at home. Another idea is to suggest that a perfectionist student earns an 80-90% on school work.  Then discuss the consequences of that outcome.  Did the world come to an end?  Probably not.  Or teach them to prioritize which tasks they are going to excel in and which they can reasonably let lie a bit.

Help them see the benefits of making mistakes.   Read the book Mistakes That Worked which is full of stories of mistakes that ended up being cool new inventions.  Or The Girl Who Never Made Mistakes, a humorous story illustrating that it is indeed okay to make mistakes.

For older kids, share this research that recently appeared in the Journal of Experimental Psychology: Learning, Memory, and Cognition that found that learning becomes better if conditions are arranged so that students make errors. Participants who failed at their first attempt to solve a problem, were better able to remember the correct way to solve the problem once taught the correct way to solve.  Note:  This is one reason why we love Teaching Textbooks for Math so much.  Incorrect problems are corrected immediately for more meaningful learning!

Share your own struggles.  One of the most powerful things we can do as parents is to be real and relational.  That time the power was shut off because I forgot to pay the bill?  Embarrassing for sure, but a great lesson in how adults make mistakes too.

Don’t give in to their perfectionism.  Perfectionism will grow if it is encouraged. Despite your child’s tears and tantrums about not having things ‘just right’,  they need to learn to live in a world where life isn’t always just the way they would like it to be.  Setting boundaries with kids where possible is important.

What Do You Say?

I asked the members of the Homeschooling With Dyslexia Facebook Page how they helped their perfectionist kids.  If you haven’t joined our group on Facebook, you need to do that!  What an amazing group of parents.

Here are some of our reader’s suggestions for helping perfectionist kids:

How about you?  How have you helped your perfectionist kids?