Motivate Your Kids by Teaching Them to Have a Growth Mindset

If you have kids who shut down when learning gets hard, read this post on how teaching kids to have a growth mindset can motivate them to press through those difficulties. 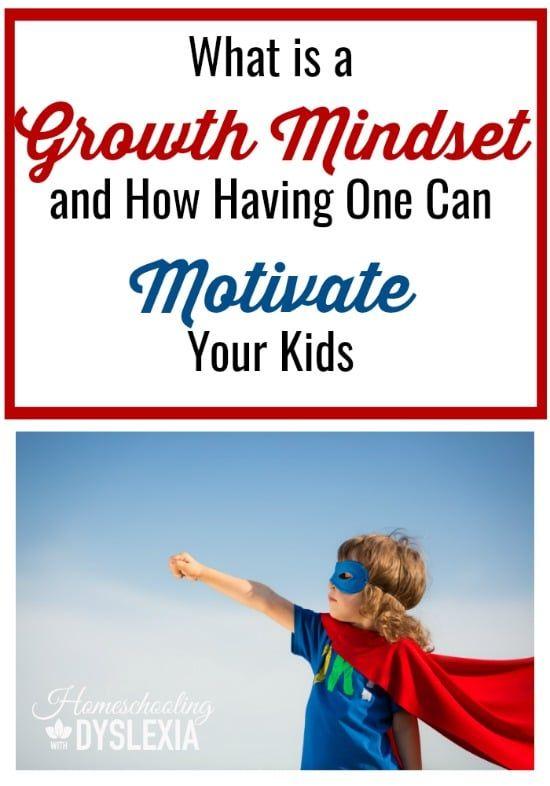 If you’ve been around the Homeschooling With Dyslexia web site or Facebook page for long, you know how I love to learn about learning. Since I learn completely differently than 7 of the 8 kids that I homeschool, you could say it is a bit of a necessity. Good thing I have learned to enjoy it!

Today I am going to share with you about some fascinating research that was done at Stanford University here in California by Carol Dweck. Carol and her team were studying the idea of learned helplessness in lab animals and began to apply their knowledge to the same sorts of attitudes in people.   This research led them to learn about the profound effect of a person’s mindset, or attitude about learning, could have on motivation and academic performance.

In her research, Dr. Dweck identified two types of mindsets; the fixed mindset and the growth mindset.

Fixed Mindset: This is the belief that intelligence is fixed and that any subject that is difficult or requires much effort simply means that you are dumb.

Growth Mindset:  This is the belief that intelligence can be grown and that subjects that are difficult or require extra effort mean that you are increasing your intelligence.

Let’s look at some of the research done at Stanford to illustrate this concept a bit better.

Dweck took a group of incoming 7th graders and divided them into two groups based on an evaluation of their mindset – the fixed mindset and the growth mindset groups.

Both groups of kids were working at the same level academically at the beginning of 7th grade, but by the end of the first term their grades were clearly split with the growth mindset group significantly out performing their fixed group counterparts. This trend continued steadily over the next two years. Interesting, huh?

Here are a few more observations of these two distinctly different kinds of mindsets:

Because of these beliefs, students with a fixed mindset had no real way to handle learning difficulties so were quick to give up or become defensive – either acting bored, acting out, blaming the teacher or the material to hide their fear of not looking smart.

Because of these beliefs, students with a growth mindset learned how to capitalize on their mistakes and look at set backs as a natural part of learning.

Thomas Edison had a growth mindset.
I am not discouraged, because every wrong attempt discarded is another step forward.
– Thomas Edison

How Do We Get Our Mindset?

Simply stated, we develop our mindset based on the kinds of praise we receive with regards to our efforts. Research done at the height of the self esteem movement found that this constant praise of ability was back firing.

Let’s look at another bit of research to better understand this point.

Kids were given a fairly simple non-verbal IQ test. The 3 groups received a different response towards their work:

Praise for their process: the second group was praised for their effort. “You did a great job! You must have tried very hard.”

The control group: this group received a neutral response. “You did a great job!”

It was concluded that both groups of kids were sensitive to what the researchers valued – effort or intelligence – and were motivated to continue to score well in those areas.

The Powerful Effect of Praise

Recent studies have shown that the ways a mother praises her baby predicted that child’s mindset 5 years later. The development of mindset – whether fixed or growth – starts young. The good news is, however, that everyone’s mindset can be changed.

By changing our language and being particular about which words we use, we can begin to change the mindsets of our kids and ourselves.

In one school, instead of giving a non-passing grade to students, they were given two words – NOT YET. Think about what this implies.

Try adding the word ‘yet’ on to these negative responses common within the fixed mindset.

If a student says:

Add yet to the end of the sentence.

The Transforming Power of Teaching a Growth Mindset to Students

Researchers took a group of 7th graders, all with a fixed mindset and divided them into 2 groups.

Group 1 received 8 sessions of study skill instruction as well as  growth mindset instruction. They were taught how to study and also taught how every time their brains worked hard, more neurons formed in their brains and that over time, they would become smarter.

Group 2 received only the 8 sessions of study skill instruction.

The results were significant. Group 1 scored dramatically better on their coursework during the following year than Group 2.  A mindset can be changed!

There is a ton of research being done on the power of a person’s mindset showing that a person’s attitude towards their ability to learn is an incredibly powerful indicator of how that person will perform academically, and this attitude, or mindset, can be changed!

This can be especially profound for the student who struggles to learn because of dyslexia, dysgraphia, dyscalculia or ADD.  I know that there are kids in our family, the ones with more natural academic ability interestingly, that struggle with a fixed mindset.

How have you seen this mindset play out in your family?

Join me tomorrow for a look at How to Teach a Growth Mindset.

Big Life Journal Known for their best-selling journals for kids and teens as well as beautifully illustrated worksheets and motivational printables.

Mindset by Carol Dweck. Read from the researcher herself about the strategies used to study the amazing impact of a growth mindset on students.

How can you see teaching this growth mindset changing your kids’ attitudes and motivation to learn?