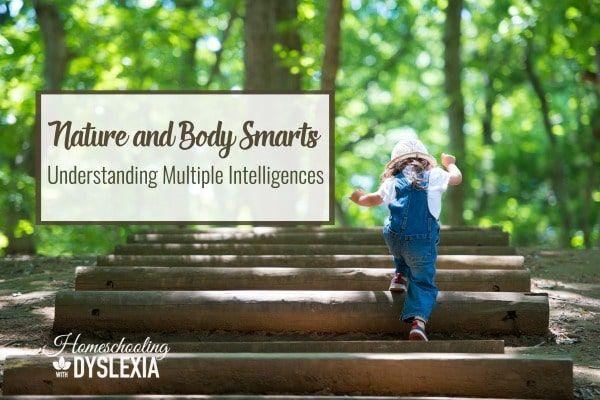 Welcome to the 4th post in the Understanding Multiple Intelligences 5-day series! Read the whole series from the beginning here.

In the first post of the series, we talked about what the theory of Multiple Intelligences is and how it can transform the way you and your kids look at intelligence. Next, we looked at two of the intelligences (or smarts) that are associated with strong academic performance: Word and Logic Smarts. Then we looked at what I call the Artistic Smarts: Picture and Music Intelligences.

Today we’ll look at the Street Smarts: Nature and Body Intelligences.  As you read through the signs and struggles associated with each strength, mark where you think your kids fall on a simple graph like the one below. 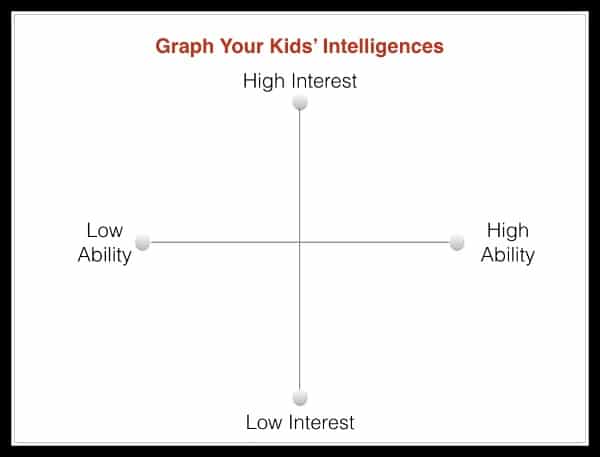 Nature smart kids have a profound affinity for animals. I have a few nature smart kids. One of them is nicknamed ‘the squirrel whisperer’ for her uncanny ability to coax even the most resistant squirrels out of their hideaways to nibble a cracker just inches from her hand. This daughter almost never played with dolls but preferred to play with stuffed animals. Nature smart people think with patterns. They are good at classify things in nature like birds and trees etc. This is closely tied in someways to being picture smart but they don’t think in pictures rather in patterns. Their interest can be animals or plants or even weather. Basically, these people are tuned into their surroundings.

Signs You May Be Nature Smart

One of my nature smart kids once asked me, “Mom, is it weird that I prefer animals to people?” For that child, it was always a delicate balance between her becoming too isolated because she just preferred the tranquility and peace of animals over people.

There is a wide range of careers that would be suited to a person with strong nature smarts. Remember there is a hierarchy among the various smarts and that each individual will have their own unique career path. 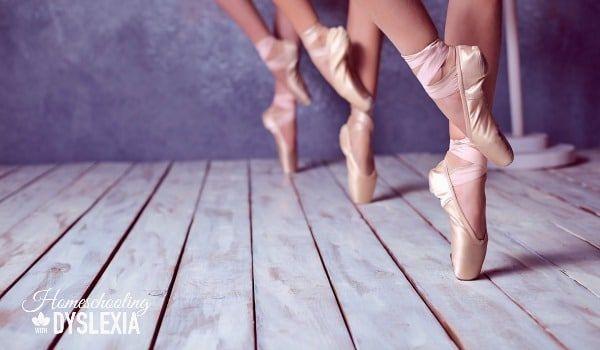 Body Smart kids think by moving and touching. When they are excited, they move more. Motion is very important to them. They learn and think with their entire body. Their hands are busy building, writing, touching, twisting hair, playing etc. Their feet are busy tapping, shifting in place, or walking.

Signs That You May Be Body Smart

Kids who are body smart can use those strengths for the wrong reasons in unique ways. Teaching kids to be smart with their smarts will both affirm their strength and help them develop much-needed self-control.

The Story of Gillian Lynne

I want to share an interesting Body Smart story. The story is about a little girl named Gillian Lynne who grew up in England in the 1930s. Gillian’s teacher complained to her mother that she was having a hard time sitting still in class and that her behavior was distracting the rest of the students. This teacher suggested that Gillian see a doctor to figure out what was going on with her.

The doctor told Gillian’s mother that there was nothing wrong with her – that she was a dancer. The doctor suggested that Gillian join a dance school. Julian’s mother was able to enroll her in a performing arts school. Gillian was reported to have said of the other students, “They’re all like me!”

Gillian went on to become an accomplished dancer with the London Ballet. She also became a world famous choreographer and is best known for her work on musicals such as Cats and The Phantom of the Opera.

Gillian’s story is a powerful example of how we are all created uniquely and for a purpose. Imagine if Gillian had grown up in today’s schools? Medication, anyone?

Body Smart people gravitate toward careers that rely on a sense of touch, hand-eye coordination, and or large motor movements. We all benefit from professionals with Body Smarts, from a chiropractor’s adjustments, a dentist’s drill or a hair dresser’s scissors.

How has learning about Mulitple Intelligences changed the way you look at learning and your kids so far? Let us know in the comments below.

Join us here tomorrow when we’ll look more closely at The People Smarts: People & Self Intelligences.

Linking up to the iHomeschool Network 5-Day Hopscotch. Click the image below to read more great posts in this series.