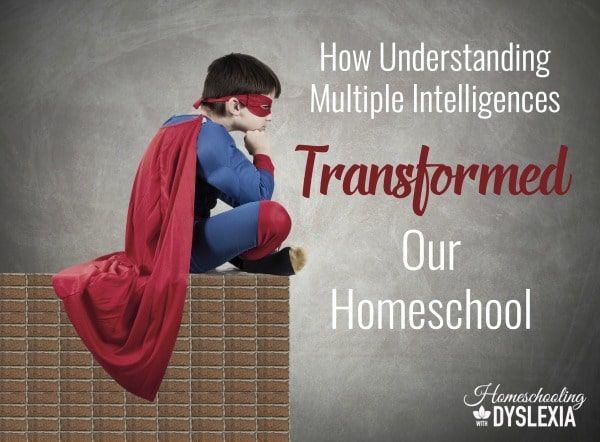 I am one of the most left-brained, linear people I know.  Being the mother of 7 kids who are about as right-brained and creative as they come has taught me a LOT.

For many years I tried as hard as I could to pound those ‘square pegs’ into round holes. Maybe you can relate? Maybe you too have tried to force your children to be good readers and good mathematicians – you know, ‘good students’. After all, this is the road to success, isn’t it?

I am very left brained and linear but I’m also a mother. And it didn’t take long for me to realize that my teaching methods, my ideals and ideas of what education was – of what intelligence was –  were hurting my kids and needed to be re-examined. A big part of the reason that this website exists is due to my determination to figure out why my own children who are very bright and capable struggled to learn.

This is when I learned about Howard Gardner’s theory of Multiple Intelligences. If you are struggling to understand your child who just isn’t learning like other kids – your world may be transformed by this information as well.

What is the Theory of Multiple Intelligences?

The theory of Multiple Intelligences (MI), was proposed by the brilliant Harvard scientist and researcher Dr. Howard Gardner in 1983. His theory was a backlash against the notion that intelligence could be reduced to a formula and be measured by a test. Dr. Gardner theorized that there were many ways to be smart – 8 in fact.

Gardner suggested eight intelligences (there are several others being considered).

Now clearly, we all have all 8 intelligences, but Gardner theorized that we are all stronger in 2-3 of the intelligences. Our unique mix of intelligences results in some phenomenal recipes for success.

As the mother of eight kids, I often joke that we are conducting our own genetics experiment over here! Honestly though, when I began to look at my ‘outside-the-box’ kids through the lens of MI theory, I was better able to define what I already knew. My kids who couldn’t read or spell well, could do things that I could never do. My kids who couldn’t remember their math facts to save their lives, were amazingly intelligent in other areas – areas that had value.

Increases confidence:  Everybody wants to be smart. After understanding MI, instead of asking, “Am I smart?? kids can ask “How am I smart.”

Gives purpose:  We teach our kids that they were created with a purpose.  As we begin to focus on what they love and what they are good at, that purpose becomes more and more clear.

Volunteering and career choice:  When a child’s purpose is openly explored, choosing a career or job becomes an organic outshoot of that knowledge leading to more fulfilling work.

How to Identify Your Child’s Intelligences

Pay attention to their interests.  What do they do in their spare time? What did they spend their money on? What do they keep talking about? What gets them up in the morning?

How to Nurture Your Child’s Intelligence

Observe and acknowledge their unique smarts. I am the daughter of an engineer and an accountant. Imagine the confusion my parents experienced when their son (my brother) showed strong picture smarts and wanted to pursue a career in art.  It isn’t enough to simple observe, we must also acknowledge thier intelligence – even if it is vastly different from our own!

Offer opportunities to strengthen their intelligences. Sign your picture smart child up for art classes. Allow your nature smart child to have a pet or two. Find a mentor for your logic smart child, if that is not one of your strengths.

Set healthy boundaries.  As a child, I loved to talk. In fact, my report cards often said things like, “Great student. Talks too much.” However, although I was occasionally consequenced for my talkative nature, I was never shut down or told to shut up. My parents and teachers set healthy boundaries for me and, interestingly, now I travel around the country every year speaking to families about homeschooling and parenting their kids!

How to Shut Down our Kids’ Intelligence

Watch your reactions. We can stifle our kids’ intelligence by how we react to them – even with simple things like our tone of voice or a look. You know that look! I have one music smart kid and I am here today to tell you that that kid is NOISY! He is often humming, tapping, and otherwise making noise, er, I mean music.

Criticize rather than correct.  Kids can become discouraged if we are continually disappointed and frustrated with them. Focusing on specific correction rather than criticism can help with this.

An attitude of perfectionism. Trying to find ways for our kids to grow and explore can be messy and, quite frankly, inconvenient.

Over the next 4 days, I will be diving into these 8 intelligences; including signs and strengths, struggles common to each strength, and possible careers for each intelligence.

The People Smarts: People & Self Intelligences

Have you ever heard of the theory of Mulitple Intelligences? How has it helped your kids?

Linking up to the iHomeschool Network 5-Day Hopscotch. Click the image below to read more great posts in this series.