10 Myths About Dyslexia and How They are Harming Your Kids

There are many myths about dyslexia and they are harming our kids! Learn 10 myths and the truths behind them. 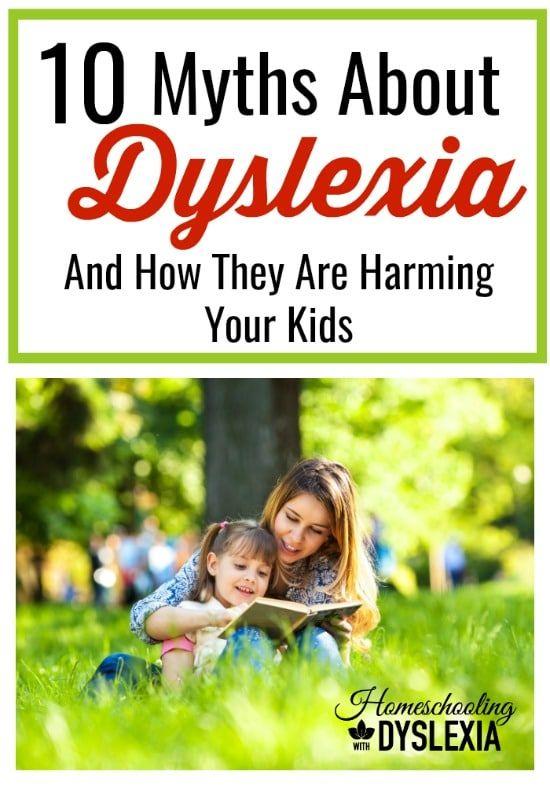 I clearly remember the early days of our family’s dyslexia journey.  I remember being confused about what this new dyslexia diagnosis meant to my son and his future.  Not understanding what dyslexia really was and not being able to differentiate between what was myth and what was fact caused me a lot of worry.

As many of you know, over 20 years since that diagnosis (the first of 7 diagnoses), I have come to look at dyslexia largely as a learning difference – choosing to focus on the many inherent strengths of dyslexia instead of the weaknesses that have traditionally defined it.

The following ten myths are widely believed and are harming our kids.  How?  Keep reading.

Dyslexia doesn’t exist. I’ll never forget when someone I greatly admired, scoffed at the idea of dyslexia, boldly stating that dyslexia didn’t even exist!  How frustrated I was for my child, who was being judged by a myriad of other dyslexia myths.  On the contrary, dyslexia is one of the most researched and documented conditions that impacts children. Dyslexia is genetically based and has been shown to be clearly related to neurophysiological differences in brain function.

Learning disabilities are correlated to IQ. In my experience, this myth is one of the most damaging.  Dyslexia is not related to intelligence. In fact, one of the hallmark signs that a child may have dyslexia is that there is a discrepancy between their intelligence (average to above-average) and their processing speeds and academic performance.  Unfortunately, many kids with undiagnosed dyslexia grow up thinking that they are dumb – a false belief that affects them for the rest of their lives.

Children will outgrow dyslexia. Have you ever heard someone say, “I used to be dyslexic.”?  That’s not true.  They may struggle less with reading and writing than they used to but dyslexia is never outgrown.  Research shows that if a child is struggling with reading, writing and spelling in mid-first grade, there is a 90% chance that the child will still be struggling in 8th grade and into adulthood. With early intervention, kids with dyslexia can avoid the embarrassment of falling behind their peers.  They also learn and progress much more quickly in the younger years.  Don’t worry though – it is never too late to learn to read!

Dyslexia is caused by bad diet, bad parenting or watching too much TV. I know that I bought into this myth quite a bit early on.  While bad diet, bad parenting and watching too much TV aren’t good for any child and certainly won’t help a child with dyslexia, dyslexia is genetically based.  One of the criteria for determining if a child is dyslexic, is that they have a close family member that is also dyslexic.

Dyslexia can be helped with medication. There is no medication to help with dyslexia. As many as 40% of kids with dyslexia also have Attention Deficit Disorder {ADD}. There are some medications for ADD, but they won’t help with reading, writing and spelling – only attention issues. 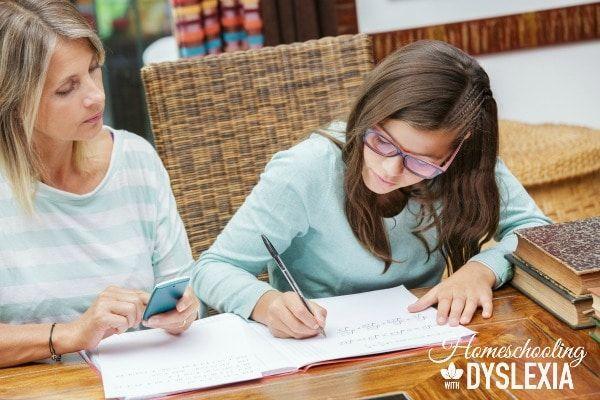 Dyslexia is a visual problem.  Dyslexia is far more than just reversing letters and numbers.  Most kids reverse letters or numbers while they are learning. Continued reversals after 2 years of instruction is considered one sign of dyslexia. Dyslexia, however, is not a vision issue. Dyslexia is a language processing disorder.  The confusion lies within the brain and how it processes written material.

Dyslexia affects more boys than girls. More boys are sent in for dyslexia testing than girls, but research shows that an equal amount of boys and girls are affected by dyslexia. Because boys tend to act out their frustrations of not doing well in class, they are noticed and sent in for testing. Girls who aren’t doing well in class tend to be more quiet and try to avoid being noticed. Sometimes they are only diagnosed in high school or college.

Dyslexics are lazy and need to work harder. This is perhaps the single most damaging myth about dyslexia out there.  Research has shown by the use of functional MRIs and brain mapping that slower readers use different parts of their brains when reading and working with language. The findings provide evidence that people with dyslexia are not poorly taught, lazy, or stupid but have an inborn difference in brain function that has nothing to do with intelligence.  The sad irony of this myth is that most dyslexic kids are trying harder than other kids – yet are still falling below the mark.  Adding to this unfortunate truth, the accusation of being lazy and you have added insult to injury.

Dyslexia is untreatable. There is no miracle ‘cure’ for dyslexia.  It is not a disease that can be treated with a pill. It is a way of thinking, the way the brain is wired and how it processes information. Research has shown that the brain can actually be rewired to process the written word the same way as ‘good readers’ if the individual is taught with systematic, explicit, sequential phonics taught in a multi-sensory way.

How These Myths Hurt our Kids

Dyslexia in the school years can be hard.  Without the right interventions, students with dyslexia can struggle with reading, writing, spelling and other subjects without ever realizing that there is a reason for their difficulties.  This can lead to feelings of severe inadequacy and anxiety.  Parents and teachers, who can clearly see that the dyslexic student is intelligent, often fall into believing these myths about that student.

What’s Next?  Moving Past the Myths About Dyslexia

If you believe that your child may be dyslexic, read these:

When interviewed, successful students with dyslexia said that the single most influential experience that helped them to handle their dyslexia and come out strong was the presence of one caring adult. One adult that learned about dyslexia and how to help that child succeed.  That is you!

I created a series of Parent Dyslexia Classes to help quickly educate parents (or teachers) of dyslexic kids.

Visit our Classes Page for more information and to learn more or to sign up.  Educate yourself so you can educate your child!

How about you?  How many of these myths did you believe?